Without a doubt this is one of my favourite conversions and one I’d wanted to work on for a long long time. I waited until I had a lot of experience with scaled up Space Marines before even attempting it. The first attempt on the build had the right structure (size, shape, etc) but the pose was just off. I was able to fix this largely by adjusting the angle of the base. The sword is off of Be’Lakor, The Dark Master. The topknot is obviously from the original head but the metal head itself is just too tiny to use, hence the head swap. The claw would be completely scratchbuild to look something like the artwork from the Horus Heresy board game from Fantasy Flight games. 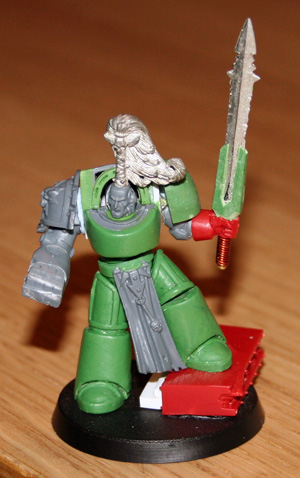 I spent a few days on just the talon by building each segment of each finger separately and really devoted a lot of time to it. In all, more than 40 separate pieces went into it’s construction. To make the fingers I fashioned each section of (12 pieces in all) from a 2mm thick of plasticard. This ensured that each finger was the same width. I cut each piece bigger than I needed and gradually whittled them down with a scalpel to the right size. I used a similar process for the teeth on the sword. 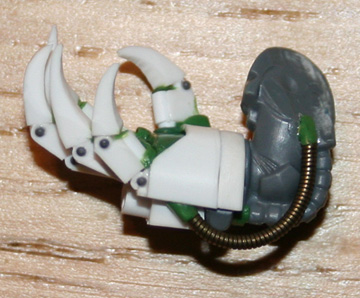 The trophy spikes were made from components from the Chaos Terminator trophy bits reassembled on to cocktail sticks that were then pinned to the torso. I opted not to use scaled up shoulder pads (perhaps wrongly) because the existing one were difficult to make fit as it was.