This particular conversion has been a long time coming but I’ve been a bit distracted lately. This is a rebuild of the stock Vulkan He’stan into something a bit better than the existing skipping rope pose. 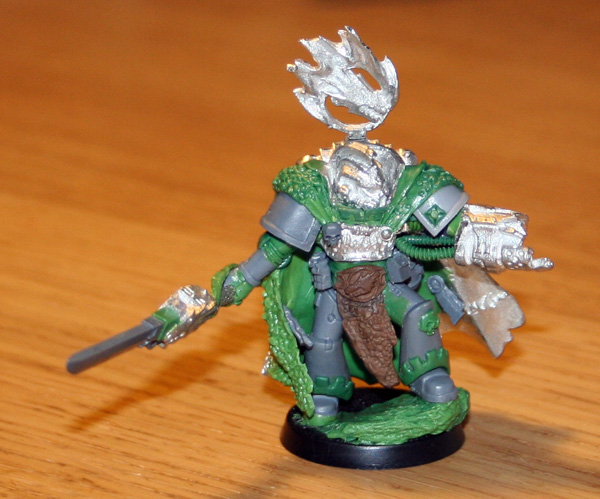 I knew that this being a regular scale conversion I wanted to use the existing model as a base to work from, because despite the pose it still has many nice features. I began by cutting away the bulk of the body (after making a mold of the loin cloth so I could restore it later). I attempted this cutting away with a dremmel kit, but in the end I settled on using a pillar drill and an 8mm drill bit just for the sake of saving time. With the release of Finecast I guess we aren’t going to see so many difficulties working with white metal anymore, and that’s something I’m quite thankful for. At first I only removed the lower legs (see an early WiP here) but after much dry fitting I ended up also removing shoulder pads to give me more freedom with the pose. I remove the pads with a pair of clippers but I would advise anyone using clippers on metal not to use the GW brand as they simply aren’t strong enough (I’ve had a pair of GW clippers snap and nearly take my eye out a few years back).

Before I removed the shoulder pads I made a mold of each to help me rebuild the cloak and the way it drapes over the shoulders. The stubby blade on the spear was removed and replaced with a GK plastic blade. The rest is largely self explanatory. The pose itself was largely inspired by this piece of John Blanche artwork.