Find the post about the making of the wings here.

Find the post about painting and Finished model here.

So after much deliberation I’ve settled on building a Beastmen as my army for Warhammer 8th edition. I like the fact they are one of the least popular forces being collected but I also think I can make them into a great looking army (most important part for me). My starting point is the theme of the army, which will be Tzeentch. Yes, I know Beastmen’s rules aren’t tied to any one God of Chaos anymore but that’s not important. I’ve always favoured Tzeentch above the other Gods and I’m a real big fan of what was done for Tzeentch in Warhammer Online (aesthetically speaking), a move away from the traditional bright primary colours and presented in the subtler form of the Raven God. As such the Chaos forces from the game will be a big influence on the aesthetics for my conversions and painting.

The first major conversion for the army will be a Doombull who will serve as the “army champion”. As progress develops on the conversion I’ll update this post, so scroll down to see how it’s going :-). Starting at the beginning, the inspiration for this character will be this image from White Dwarf 135.

Trying to duplicate this simple conversion 20-ish years ago was one of my first forays into converting minis. With a little help from the guys on Warseer I came up with this equipment list for him.

The Carpet will allow him to fly and will be represented by his large feathered wings. The rest of his gear gives him a 1+ save and allows him to hit first with re-rolls most of the time. The Shadow Hide gift will also influence the final look of the miniature. Later on I’ll come up with a suitable backstory about this winged shadowy lone minotaur who has been chosen by the Raven God to act as my general’s personal champion.

I acquired a GW Doombull off of Ebay and started giving the project some thought. As I worked on the components I did change my mind a few times as to whether to give him wings or not, as the most important thing was making a great looking model and I didn’t want it to be too over the top. I didn’t want to convert it just for the sake of it, because its a great model as it is, but I feel I need to do something special with it. Only after the model started to take shape did I decide to proceed with the wings, but I made the decision that to make them look right I would have to make them myself. Before that though I concentrated on the basics.

To start with the trotters for feet had to go. Minotaurs should have hooves not two ways about it. Why GW continue to make their Minotaurs with anything but hooves baffles me. I found a tail from the Be’Lakor model that I really want to use on this conversion. It’s lizard like but not an unreasonable addition in a beastman force and I think will help sell the idea of the Gnarled Hide mutation.

The first thing I did with my Doombull bitz was hack them up. I took the main chunk of the body and removed the legs as cleanly as I could, trying to save the chain loin cloth but not before I made a Blu-Stuff mold of the loin cloth (just in case).

I could now pin the legs (minus the stupid feet) back onto the torso and start to work out the pose. I wanted him to be charging forward rather than standing still as the standard model is. I also felt this necessary to distance the conversion from the stock model as best I could. I say this because the worst conversions are often the ones that immediately scream “Conversion!” because they look way too much like the standard model with some OTT element to them.

Next I inserted pins in either end of the legs and attached them to the torso, filling the gap with junk Green Stuff. To clarify, when you get Green Stuff in two adjoining strips it is a good practice to not use the middle bit where the two colours meet as this greenstuff has a small amount of already cured material (appears as lumps when mixed). This is what I call junk Green Stuff. However, I don’t throw this away as it is fine for filling gaps where it’ll later be sculpted over.

I then used pins in the lower legs to attach it to it’s base leaving what I thought would be enough room for new hooves. Once I’d bulked out the hooves in a rough fashion I realised I’d not left enough room, and he would end up with really stump lower legs. So with great difficulty, as I’d glued the pins in place, I readjusted the whole attachment giving some extra space to sculpt the new hooves. Unfortunately I then realised I’d gone too far the other way and now his legs were going to be too long. Rather than make do I ripped the whole thing apart and started over. Sometimes, especially with complex jobs like this, you have to be willing to take 2 steps back before you can go 1 forward, but it always leads to improvements in the final work.

Whilst working on this I decided I was going to have to heavily convert the head because the standard Doombull head wasn’t good enough for me and I wanted something of the more like classical Minotaur look. At first I was going to hack large areas of the existing head off and rebuild it, but whilst looking for some reference images I came across Bane Beasts models from Maelstrom Games. Whilst their monsters are some of the best I’ve seen, I’ve never been a fan of big monsters in my armies, but then after a browsing a little further I found their Bane Lords range and minotaur standard bearer Kaastaruk. It’s a beautiful piece of sculpting and I bought it right away simply for the head which I intend to swap with the Doombull metal head.

I had trouble with the connection of the new head onto the body and have had to sculpt a lot of extra muscle to make it look right. Took a lot of work to get it right but it’s been worthwhile and the head looks like it belongs now.

I had to remove him from the base twice more to get it correctly located (he’s been attached and removed from the base four times now). I made a duplicate of the shoulder pad to fit his other arm (Blu-Stuff mold) which I think looks really nice. The armour plating that normally fits that upper arm I decided to leave off. The arm itself I wanted to re-sculpt with all rippling muscles.

I ditched the enormous axe the Doombull came with and started work on a scratchbuilt mace reminiscent of the original inspiration model.

The mane took a bit of work to make fit as I had repositioned the head and sculpted new chunkier the neck muscles onto him. With a bit of twisting and resculpting I was able to blend it right into the small wisps of hair on the head. At first I made the hair on the top of his hair rather thick and tall to give him a mohawk, my belief that “everything looks better with a mohawk” unfortunately turned out to not be as true as I’d have liked. Still he does have a bit of a mohawk.

Right from the outset of the project I was very keen to have this guy flexing huge muscles. I tackled the muscular arm bit by bit sculpting over the existing arm (that I trimmed back a bit first so as not to risk having anything sticking out of the GS). Once I had done the upper arm I attached the forearm part but found that next to his new mass it look a bit too slender. To fix this I remodelled the armour plate to “beef it up” (pun intended) and make it match up better.

I added the chainmail loin cloth back on the model by casting it in Green Stuff from the mold I made at the beginning of the project. The club itself I’m trying to have match as close as possible the original model. The rather blobby looking spikes will be cut down with a scalpel into sharp points, I just needed to get the approximate amount of GS in the right place first. The best way to achieve a sharp edge with GS is to cut it after it’s cured (with a sharp blade of course).

So I haven’t had much time to spend on this big guy but I’m hoping to find time to spend on some flamboyant wings soon. With the exception of the wings there’s not a lot left to do on this guy. I added a chunkier studded belt by sculpting it on a plasticard strip and transplanting it onto the model about three hours later. I did this mainly because his waist just looked too slim  with the adjusted legs. I still need to add a shield/belt bulckle. I did buy an Ogre bit from www.letthedicedecide.co.uk which physically fits nicely, but the style of armour didn’t match the armour plates he already has, so I’ll probably try something else.

I added long hair to the back of his calves (I was aiming for a shire horse look). I did this really simply by making a Blu-Stuff mold of his mane and casting that detail onto the backs of his legs.I took the Green Stuff out of the molds after about 2 hours while they were still pliable and attached them directly to the legs, trimming and pushing about a bit with a metal tool to make them fit right.

To help me get a better idea of how to proceed with the wings I printed out some on paper and tacked them onto the back in roughly the right size and position. I think doing stuff like this is very helpful when working on complex conversions. More time spent considering and planning will ultimately lead to better results. I’m toying with the idea of making the wing magnetized, if so I’ll probably make them in wire and Green Stuff first and them get them cast is resin to reduce the weight a bit. I’m envisioning them being very feathery (the opposite of FW’s Lord of Change smooth looking feathered wings). 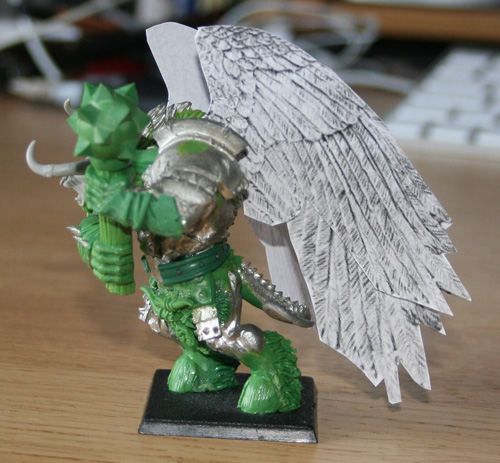