Happy New Year everyone, for anyone reading this I hope that 2015 is a great year for you.

I’ve had quite a few commission requests and some great chats with people over email during the holidays. I have to say I’m rather excited about the work ahead.

I was having a little rummage through my bitz box on New Years Eve and came across the arm-less remains of Inquisitor Hector Rex. I’d used his cloak and shield (the sword was a write off) on old projects but never made used of the other bits. So I figured I’d see what I could do to salvage what I had left and throw something together.

The body itself is very nicely detailed and really only suitable for an Inquisitor so I just went with that. I didn’t want to spend a vast amount of time on him but I’ve gradually refined the conversion into something I’m really very happy with. I tried a variety of weapons options but couldn’t resist the good old pointing figure commanding pose. Obviously the two arms are taken from some left over Space Hulk Terminators. I didn’t want to give him a bog-standard thunder hammer as that was too easy, so I shortened it and used a chunky square rod of plasticard to make the new head. I found some Forgeworld Inquisition Brass, and at first made the hammer head big enough to attach large =I= symbols on either side. Afterwards though I remade it smaller into the one you see here… bigger is not always better. 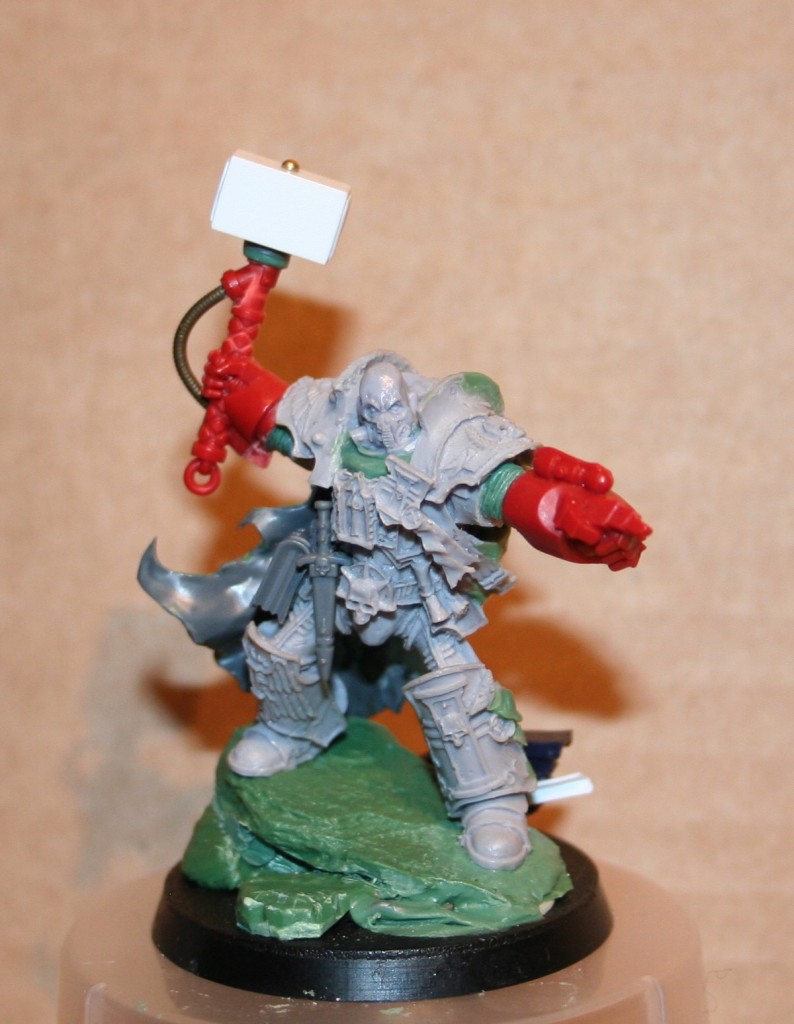 I found out a cloak from a Black Ark Fleetmaster that fit really nicely even though it had scales all over the back. Originally I figured I’d just leave the scales on, but that was a bit of a cop-out, and I need to practise sculpting cloth. You can see on the photo of the back how I’ve basically just layered greenstuff over it while trying to add a bit more ‘flow’ to the whole thing. 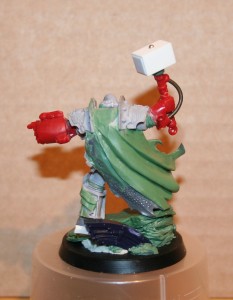 The book and ornamental knife are just nice little details that help to hide the lack of detail behind them (hidden by the cloak on the original mini). I’ve been trying out different details to attach behind the head, =I= symbols, a shoulder mounted psycannon, etc. However, I think I’m going to bring the cloak all the way up and give him a hood, a bit like the other Forgeworld Inquisitor Solomon Lok.

The final detail worth mentioning is the head. While the original head is just fine I really love this head from a Emperor’s Children Kakophoni Marine. Reminds me of Darth Vader at the end of Return of the Jedi, and I just thought it would look cool as a Inquisitor.

I was going to post this once the figure was finished, but I figured I’d see if anyone else had some bright ideas on how to put the finishing touches to the model. At this point I’m a little unsure about with I want to keep the pointing powerfist or to try something else. I could still give him a psycannon (an Inquisitorial miniature version of course), or a regular gun. Maybe a cyber pet or some kind of familiar on the base.

The project has turned from being something I was going to quickly throw together so that the body didn’t go to waste to what could potentially be the Commander of my Inquisitorial force.

If you have any cool ideas please throw ’em this way.

The figure does look much better in person. When I do the finished update, I’m going to include a 360 degree view (got a small turntable specially). If it turns out well, I’ll be using it for all future ‘finished’ updates.

Sadly, my updates haven’t been as regular as I would have liked, but I’m working slowly on changing that. Rather than create an entirely new post covering an already showcased model I’ve decided to update the existing post here. Some of you may have noticed changes to the sites format. I’m still tweaking it whenever I can but it’s starting to get closer to how I want it.

I really like the idea of an easy to navigate grid featuring all projects, and while this grid will be kept in chronological order of the updates, I’m going to start posting in a blog format as well. Even if I don’t have a new mini to showcase I want to get back into the habit of posting, so there will be the Project posts which will feature on the homepage grid and there will be the blog posts that I intend to make more wordy, and occasionally off topic.

After a lot of time refining this Inquisitor conversion I finally have him in what I would call a finished state. I’ve been experimenting a lot more lately with just plain Magic Sculp in an effort to get really smooth cloth, specifically cloaks. I tend to build them up, shape them as best I can, then when they are fully cured carve back into them, primarily scraping, to get a really smooth and refined finish. 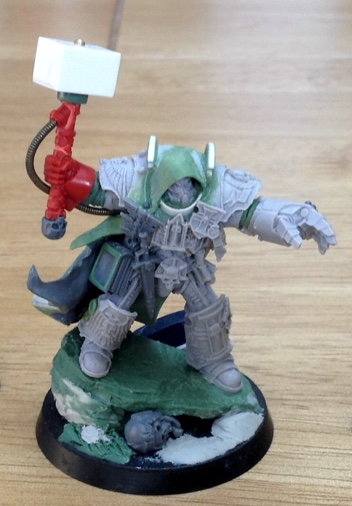 I switched out the pointing power fist for for a forgeworld one I felt was a better fit, I kind of imagine he’s gesturing in some way to do with his psychic powers. I wasn’t sure about adding the hood, but it’s ultimately just more bad-ass. The only thing I got stuck on, other than the endless work getting the cloak nice, was the inclusion of a psycannon, I mean why wouldn’t you give him one? No matter what I tried I couldn’t figure any way to equip him with one and have it look like a natural part of the model.

What I’m considering is giving him a Cherub familiar who’ll be struggling to lift up a Psycannon that’ll be wired into the Inquisitor’s suit. Just not sure if I want to make one from scratch or source it from another model.

I also decided I like the lack of detail on the Daemon Hammer. I considered adding an eagle or something, but I think keeping it the way it is gives it a good solid lump-hammer look. Might see it I can do some NMM silver effect on it.