This is my second Dante conversion. The client requested a close remake of my original, but I wanted to change the base to something a little less bland. One of the difficulties in trying to replicate a conversion or sculpt is that you just can’t make it exactly the same, there are going to be differences, sometimes those differences will be improvements and sometimes not. I think with this particular conversion the sculpting on the body worked out better than before, it definitely looks cleaner and sharper. 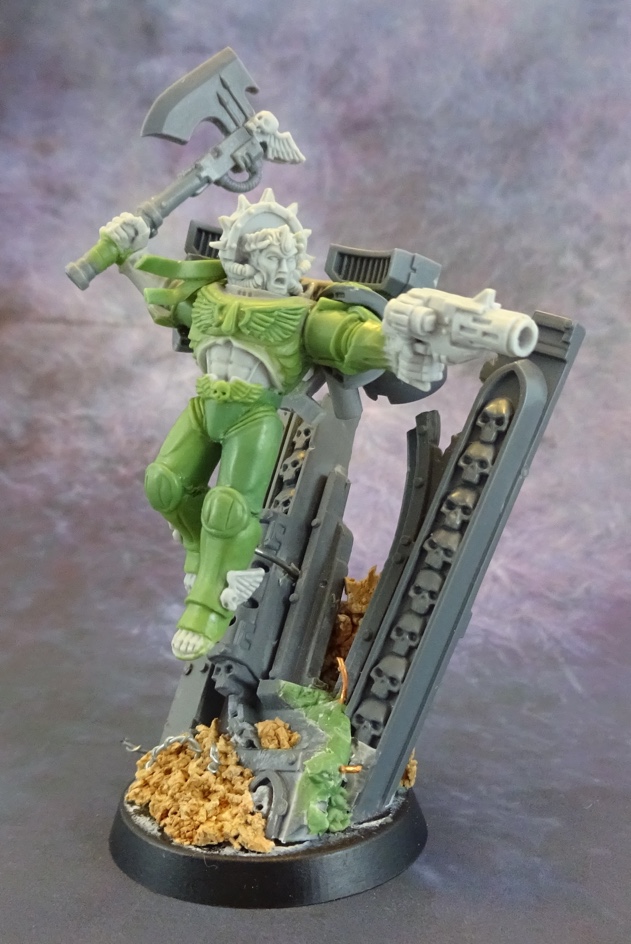 Whilst the power axe and jump pack are satisfactory they aren’t as good as the original. My first Dante’s jump pack was pieced together from single engine finecast jump packs and although a lot tougher to do, ultimately turned out better for it.

To make the body itself I essentially just chopped up a finecast Dante. The torso uses the midection from Dante and the top of a regular plastic power armour torso, which is then sculpted over. The legs were separated into upper, lower and feet, and then pinned back together with brass wire into the pose I wanted.

To give the model the impression of him floating in front of the terrain on the base required that a small amount of bare wire be visible. It’s a bit of a trade-off but one I personally don’t mind. As with the original I used a length of spring steel to attach him to the base. Not only is it really strong wire, it’s springy quality means it won’t get bent out of shape when being handled. I embedded the wire from the bottom of the base through the ruins, into the bottom of the foot and right up through the model and eventually pinning the head.

With the base on the original I had a specific idea to have this figure slightly floating above the base and when viewed from the front the base itself would form a sort of V-shape under the feet of the model. I wanted to do the same here but this time with imperial ruins, largely because I need to expand my repetoire of basing materials and styles (I tend to neglect the base work on a lot of my models and it’s something I want to address).

Although not intended to be a truescale conversion the model is certainly above standard height. Even when stood next to regular Space Marine models the height difference isn’t a noticeable issue, probably because the legs are still slim compared to my scaled up Space Marines.